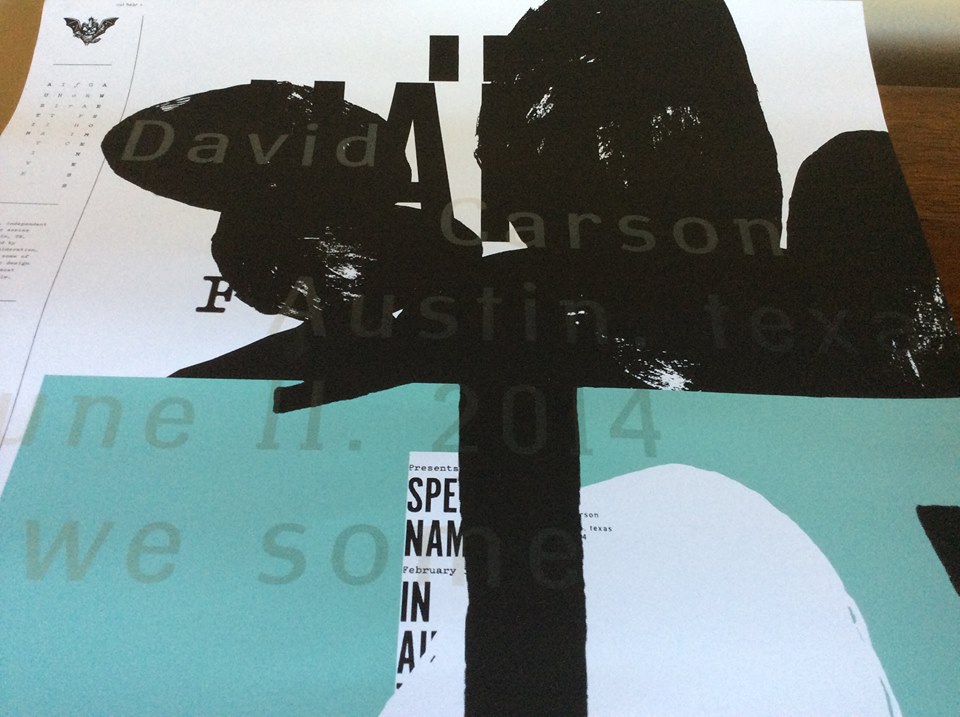 Last week an interesting discussion took place on Facebook regarding a poster design by David Carson that was modified by designer and Armin Vit. We decided to share this story with you because it embodies an important discussion for the field of graphic design regarding professionalism, ethics and authorship. Please let us know what you think in the comments below.

The controversy started when Carson published a post on his Facebook page, expressing his annoyance because the poster he had created for his talk at Under Consideration – a graphic design enterprise that runs a network of blogs, publishes books and organizes live events and judged competitions – had been changed without consent by founder Armin Vit.

“GREAT folks in Austin for my talk, a warm and welcoming capacity crowd!  Unfortunately, the event organiser, Armin Vit, from Under Consideration, chose to secretly tweak my poster, by adding some of his own design and type skills to the poster. I’m till in shock+disbelief. they dont pay you to speak at this event, so you hope to at least get a nice poster out of it, not one the event organiser redid”

Armin Vit responded to this with a lengthy statement explaining his reasons for changing the poster:

“here is my full side of the story, it does not justify what I did but it should at least explain WHY I did it, specially for those that know me and who are surprised by it.

I did not want to have to spell all this out, because it’s not necessarily the nicest representation of Mr. Carson but since he’s decided to throw the equivalent of a 5-year-old tantrum, I am not as concerned anymore.

I apologized to him by e-mail and I apologized the first time he posted something about this on Facebook. He has since posted about a dozen more times in Twitter, LinkedIn, and multiple photos here on Facebook. So I am done apologizing.

When we first invited Carson to speak, he replied promptly and was enthusiastic. Great. But it went downhill from there in terms of organization.

NOW… In the past 4 years, we have personally organized 4 conferences with 8-10 speakers each year, and 8 design juries with 5 judges each year. That’s organization for 76 people. Carson has been, by far, the most difficult: unresponsive and extremely unhelpful. Getting him to commit to book a flight was extremely difficult. Bryony, who usually handles travel arrangements, simply could not get a response and it wasn’t until I stepped in that he cooperated. He signed a speaker agreement that specified we had to have his flights booked by May 11. We booked them on May 26, 15 days before the event. For an event organizer this is extremely inconvenient and frustrating. For all of May I would e-mail him once a week trying to get his information to book his flight, without getting a helpful response or a response altogether, until he sent me an e-mail saying to “C h i l l” [sic]. Chill? For trying to do my job? For making sure that the people who paid to see you get what they paid for? I don’t think so. Still, as the date got closer I e-mailed him every other day. On May 24 we had already reached out to a good friend of ours in Los Angeles to fill in for Carson because we didn’t feel he was going to come.

After all, the man has a reputation.

So, great, we finally booked his flight. Then there is the poster. On May 1, I sent him an e-mail saying we produce a poster with the speakers’ design and that the deadline was May 23. He did not acknowledge receipt or, obviously, meet the deadline. I sent him reminders on May 26 and May 31. Finally on June 1 he acknowledged he was doing the poster and it wasn’t until June 3 that I had a poster. 8 days before the event and with barely enough time to get the files to the printer to produce.

Then here is the tricky part. When I saw the poster, I was extremely disappointed. I am — I WAS — a die-hard Carson fan. For years. So I thought giving him the opportunity to do whatever he wanted on a poster would yield to a fantastic result. What I saw was a lazy, uninspired, rushed piece of design. I know Carson’s work very well and this simply did not stand up to my expectations. For a poster I was paying for that is as much a reflection of him as it is of our event and organization. But who or what makes the ultimate judge, right?

Well, I think I have actually proved that I know a little something about design. I’m not just a “corporate hack” as someone has suggested in the comments. I co-wrote with my partner a 400-page design history book, I have judged dozens of competitions, including the Cooper-Hewitt National Design Awards, and I write daily critiques on Brand New to an audience of tens of thousands a day. I’m also a pretty decent designer myself so, yes, someone died and made me judge. And this poster was terrible. IS terrible. Someone in the comments regarded it as “brilliant” — sorry to burst the bubble, it’s not. The poster has now a built-up buzz around it and the fact that I “redesigned” it but, seriously, look past all that and tell me that this is a brilliant poster.

Compared to the two previous posters we had done with our 2 past speakers, this poster looked out of place and not up to par. I was worried that our paying audience would be disappointed. Carson did a great job in presenting and explaining his poster during his presentation — it was potato chip textures from another job — and the audience ate it up, I ate it up, and at that point the audience would have loved the poster no matter what.

So as I was sitting there, 8 days earlier, with the nearly unworkable files that Carson had sent me to produce the silkscreen poster I panicked a little and with all the frustration from the flight arrangement I decided to alter the design by taking some typography Carson had done to give the poster some kind of production hook: a varnish that is there, not there. I thought it would be something extra, where you could still see the original design in full but there was this great bit of typography that Carson had done, laying over it.

Was it wrong? Yes. Do I regret doing it? Yes. It was the wrong decision and I knew it. But it was done and no turning back. So now it’s something I have to live with and have people question my ethics. Which is fine, I can deal with it because I have a good track record that demonstrates a commitment to the industry. Next time I will first contact the designer and express any disappointments or misgivings if needed — something that would be easier to do with sufficient lead time, of course (not 8 days before the event). I like to think that in the 12 or 13 years I have been in the “public light” of the design industry I have been a nice guy who has done nice things. I screwed up this one time and got the public questioning and bashing I deserved. Fine.

So, this whole write-up is not an excuse but shedding light on why I did what I did. If you want to side with Carson, that’s great; but he’s no angel, victim, or martyr. His unprofessionalism in dealing with an event organizer — he disrespects deadlines and e-mail communications with lack of response — is blatant and now I can see why so many other organizers have felt the sting of dealing with him.

I am grateful that he showed up. I am grateful to him for putting on a great show that our audience loved. But this relationship has clearly ended here — I am mostly responsible for this, but it takes two to tango.”

What do you think about this topic? Do you think there is ever a valid reason for changing someone’s design without consulting the creator?  Share your thoughts with us!