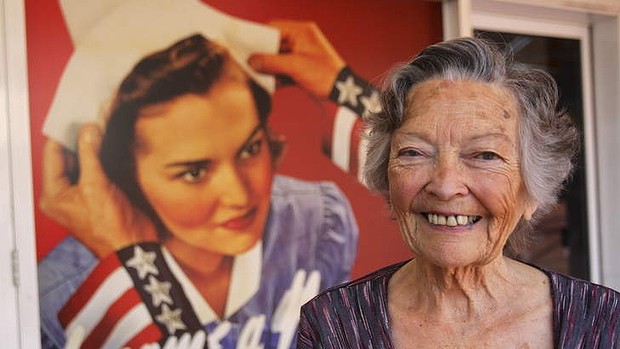 She was a first-year medical student in New York in 1942, just after the Japanese had bombed Pearl Harbour in December 1941.

US president Franklin Roosevelt foresaw a long war ahead and made the recruitment and training of nurses a priority. Enter Weslee D’Audney, a 17-year-old regarded as the ”wholesome, outdoor type”, who was paying her way through nursing by stepping out at fashion shows for Fifth Avenue stores and magazine modelling.

Ms D’Audney, with her trusting hazel eyes and perfect red lips, became the patriotic face of a recruitment campaign and one of the most recognisable propaganda posters of World War II.

This month Ms D’Audney, who lives in Auckland and married a New Zealand pilot during the war, was discovered all over again.

The poster was chosen for display outside the Australian National Maritime Museum in Darling Harbour to promote its exhibition Persuasion: US propaganda posters from WWII.

Standing next to the poster commissioned 72 years earlier, and with the still-familiar hairstyle and hazel eyes, she told how a friend in Sydney had alerted her to her renewed notoriety.
via smh