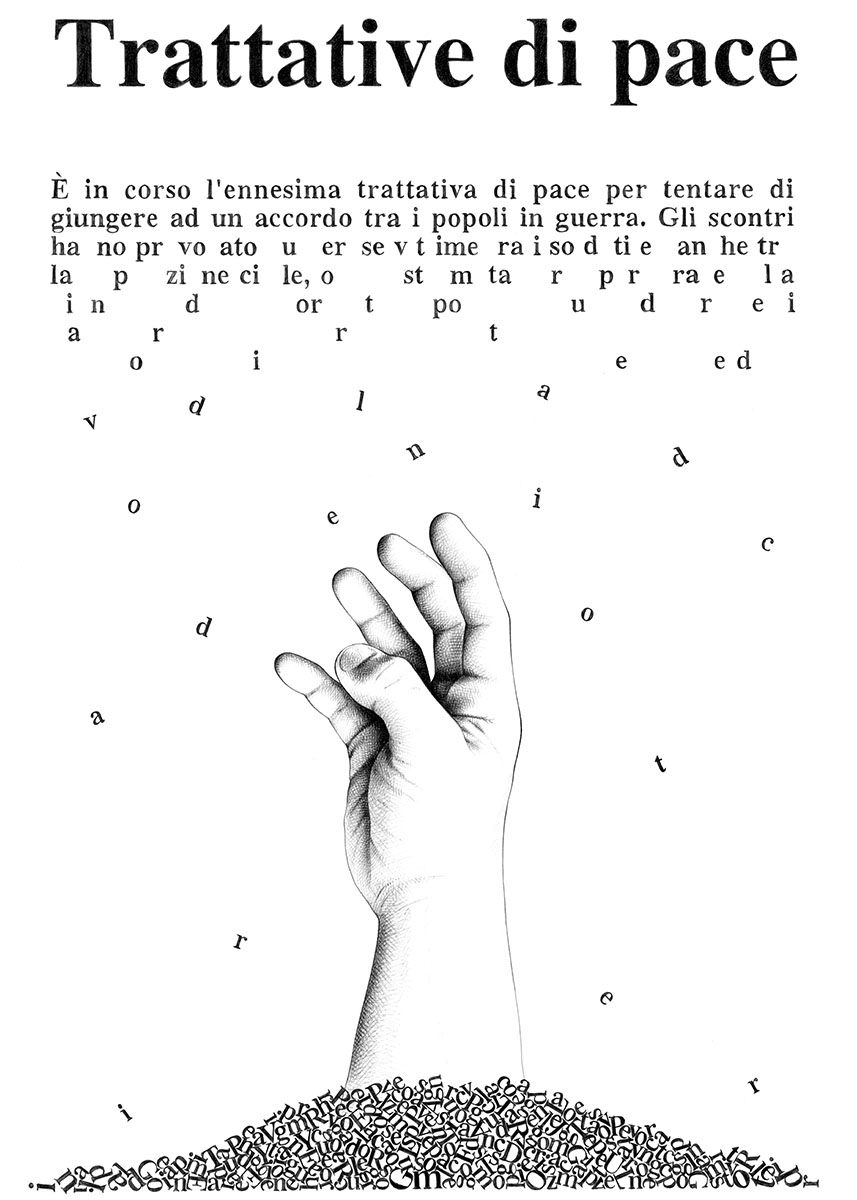 For this Poster Monday spot we have the work of a previously presented designer; Tomaso Marcolla and his first poster awarded for a competition “Peace Negotiations”. He started working as a graphic designer in advertising agencies since 1985.
“My job consisted of the classic role of the graphic designer, from the creation of a company logo to the advertising campaign, to video commercials, etc. Parallel to my profession, I carried forward what was my passion that I initially developed by creating satirical cartoons. The first prize I receive at a comic competition in the Municipality of Genoa dates back to 1996. Later I started to create posters especially for charitable associations and to raise awareness on social issues. My first poster awarded for a competition was called “peace negotiations” and dates back to 1999 and is made in pen on paper. The last prize, in order of time, is the bronze medal in the international competition “Ecuador Poster Biennial” in the poster section on the theme “Donald Trump” entitled “The wall” and is entirely made in digital”.
“Having an artistic education, in fact I graduated from the institute of art, my posters are often a contamination, a collage of traditional artistic techniques (drawing, watercolor, etc.) with digital computer intervention. The themes that I tackle in my posters are the values ​​that characterize my daily life such as solidarity, nonviolence, the defense of the environment and so on. That, linking up with current events, I try to represent in an original way that makes me curious, think and reflect. They are often surreal visions, the cow with the straitjacket (mad cow), the pig that shoots projectiles (swine flu), a cross between a sheep and a cauliflower (GMO), a drop of blood that forms the flag of Japan ( in memory of the tragic events that hit Japan in 2011). The first vignettes are born in the 90s and were made with traditional techniques, watercolor, pen, collage (mad cow). The technique has subsequently evolved with the spread of “digital”. Change the technique of realization but the inspiration always comes in the same way: a news of current events, a social problem, a fact that strikes me particularly. Later I try to represent, to intrigue, to make people reflect, in a non-violent way, even on topics that are often tragic”.

“I consider digital art as a different form of art, with some communication possibilities peculiar to more traditional art forms. The choice of the medium in fact always depends on “how” and “what” I want to communicate. However, I remain always fond of traditional techniques (watercolor, acrylic, oil, collage) that I love to experiment and that, unlike computers, offer direct contact with the work”.
If you would like to know more about Tomaso and his work you can follow his web page.

Remember that all submissions are considered each week. If you would like to submit a poster to be featured on Poster Mondays find all the info you need in our submissions page, facebook.