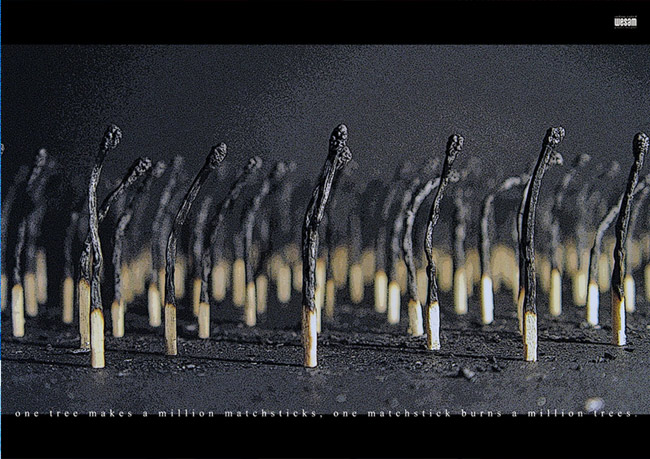 For the second Poster Monday spot of the day we are featuring Jordanian Graphic Designer & Creative Director Wesam Mazhar Haddad and his poster Matchsticks Forest.

Haddad has more than 12 years of experience in the advertising and graphic design industry, he is an international poster design award winner & speaker. He has won 21 awards in Germany, Slovakia, Mexico, Japan, UK, Russia, Jordan & Hong Kong. Today Wesam is heading the creative department in three offices within 3points advertising Jordan and KSA.

In Wesam words, every single matchstick stands out as a unique character, a piece of art, resembling a living creature, which evokes simultaneously the essential fact that these matchsticks were originally part of a living being, a tree. A composition out of matchsticks was a complicated project. Working with such fragile/sensitive elements was a huge and interesting challenge. Wesam used a thousand matchsticks to accomplish his final image; a small blow or unintended move could destroy days of hard work.

This poster (part of a series of two) won the Gold Award on the International Competition Nagoya Design Do! 2006 from Japan and was introduced in the exhibition with a movie as part of a whole/integrational concept.

As a side note remember that all submissions done for Poster Monday are considered each week. If you would like to submit a poster find all the info you need in our submissions page, facebook and twitter.