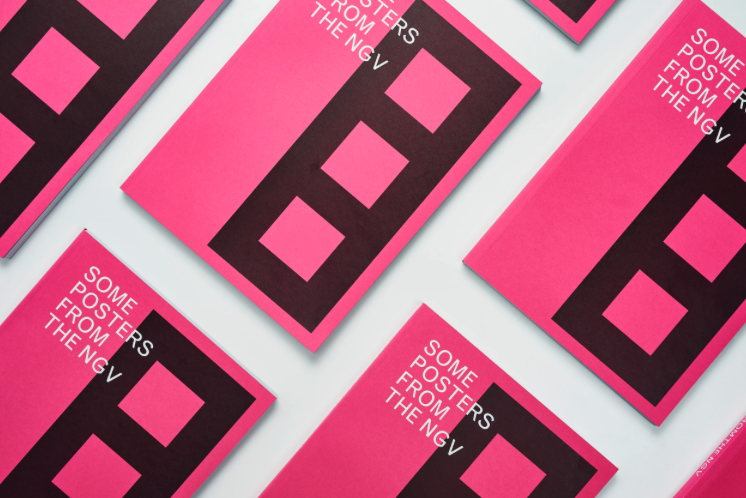 Some Posters from the NGV celebrates ninety posters from the institution’s extensive exhibition poster archive. The first book of this kind by the National Gallery of Victoria, Some Posters is a collaboration between the Gallery and award-winning designer Stuart Geddes. The illustrated volume presents a cleverly-edited selection of posters spanning 1963−1985. Key international designers Elizabeth Glickfeld, Stuart Bertolotti-Bailey and James Langdon have contributed texts contextualising these posters in both Australian and international graphic design practice.

Seen together for the first time, the selection features the work of more than a dozen designers during a 22-year period. There’s a “confidence” in posters such as American Painting, says Megan Patty, the NGV’s senior publications co-ordinator and co-editor of Some Posters from the NGV. “We see individuality happen between the designers of each period. It’s beautiful that a designer can make their mark on a place like this in ways we wouldn’t see today.”

But it’s not just the variety of style and imagery – from Sydney Ball’s optical games for The Field (1968), Heinz Grunwald’s eye-catching full-bleed illustration for Crafts Victoria 75 or the stacked and packed type of Peter Timms’ Italian Painting 1940-1960 – that makes the posters interesting artefacts. The designers readily embraced new printing techniques – lithography, screenprinting – gloss stocks and paper sizes. Perhaps, the most ambitious poster is David Sampietro’s exercise in multimedia packaging for the Survey series of Australian art from 1979. Each of the Survey posters acts as a book that incorporates a video cassette.

“David did poster design, exhibition design, book design, then this booklet-cassette packaging,” says Patty. “These designers weren’t just poster designers, they were designers practising in an institution with lots of different outputs.”

The variety of the posters offers a microcosm of the changing face and aspiration of a developing design culture in Australia. According to the curators, the designers’ quirky interpretations of international styles – from Swiss modernism to postmodernism – reveal a vital local identity and intelligence.

The limited edition book costs $59.95, and will be launched during the Melbourne Art Book Fair. A selection of posters from the gallery’s archive will be on view. www.ngvartbookfair.com

Via The Sydney Morning Herald