Poster Monday: A Home for Everyone 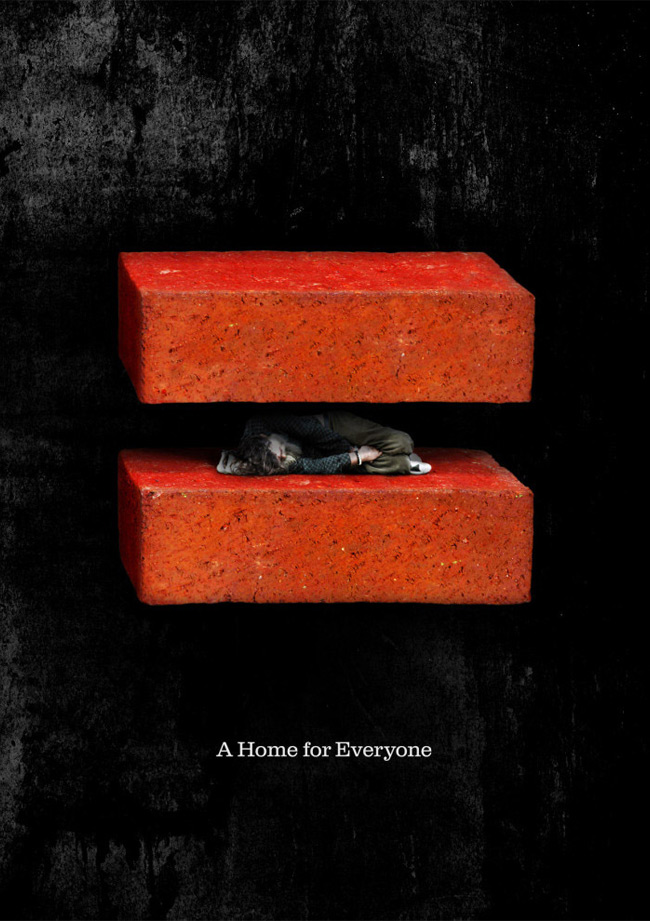 For the first Poster Monday spot of the day we are featuring a graphic designer from Buenos Aires, Argentina, Mariano “Coco” Cerrella. He studied graphic designer at the University of Buenos Aires (UBA-FADU), where he graduated in December 2001.  Started working at the same University in 2007, teaching workshops and courses on corporate identity and social poster design. Currently Coco is in charge of two workshops in graphic design at Devoto prison, under the Prison Education Program, UBA XXII. He is also the director of the Design Studio LuminaSur and since 2012 coordinates the Communication’s Department of the NGO Engineering Without Borders Argentina, where he has learned that  graphic design can build bridges to create a more equitable world.

The poster we are featuring here today entitled “A Home for Everyone” was designed for Poster For Tomorrow’s 2013 contest under the same name. According to Coco the idea of ​​the equal sign “=” represented by bricks seemed good and simple, but insufficient. It took him a long time to decide whether or not to include the sleeping person protected by this sign.

As he did in this case, before starting a poster Coco always sketches in his notepad, wherever he is, using a black pencil. Finding a good idea can take him  and it’s only until he has found one that he moves on to the computer. For Coco designing is a mental and intellectual process. He designs with the illusion of creating consciousness, or at least an internal debate in the viewer. But he doesn’t believe designing is sufficient to generate a social change; for him this  seems like a very naive idea. Nevertheless, he is convinced that this small contribution of generating a debate or bringing a subject into discussion is worth for designing social awareness posters.

One comment on “Poster Monday: A Home for Everyone”