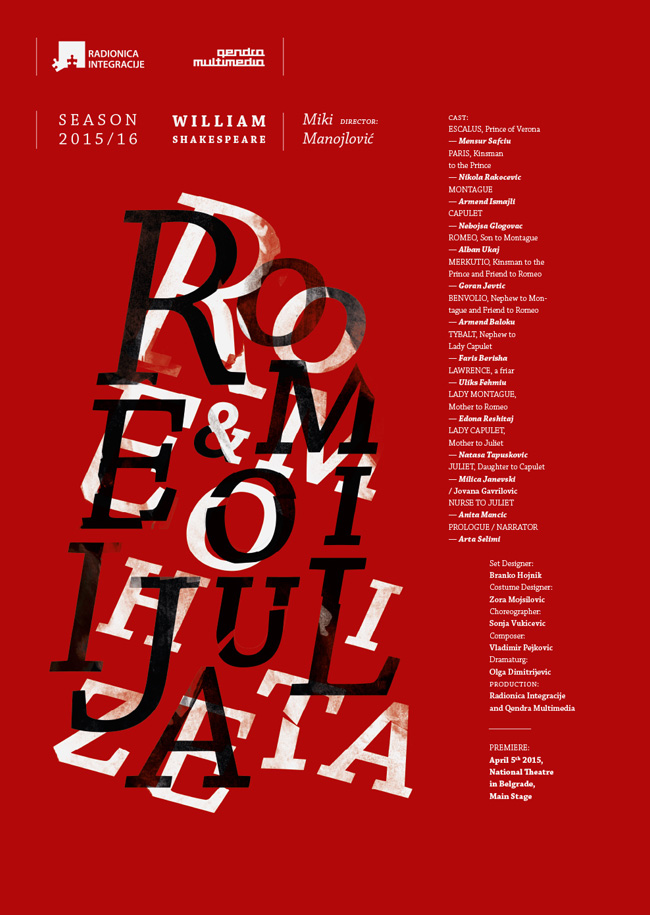 The second Poster Monday spot of this week belongs to Vjeko Sumić from Croatia for his poster entitled “Romeo & Juliet”. Vjeko was born in 1984 in Split, Croatia and finished the design school in Zagreb, Croatia. After working several years in a design firm, he moved to Belgrade, Serbia, to continue his creative career running his own design studio (V& – Design Studio).

This poster is for the Theatre Play “Romeo & Juliet – William Shakespeare” Directed by: Miki Manojlovic. The play is conducted in Serbian and Albanian language mixed together (with no translation) along with the cast being half from Kosovo and Serbia. This has a double meaning because in the original play there are two rival Italian families (Capulets and Montagues), and in this interpretation are one Serbian and one Albanian families who have both loose a precious thing. Because of the current political situation with Serbia-Kosovo-Albania this is a major theme and this play tackles it completely.

“The poster is a direct interpretation of the play meaning in the typographical sense. Because of the fact that mostly everybody in the world has heard of Romeo&Juliet in some sense, the design allows more freedom regarding the legibility of the headline, and with that in mind, the typographic illustration of the play name has been used in all materials later on. Wall banners, Program Cover, Facebook page promotion…”

“As an outsider in Serbia I watch the political situation from a different perspective, maybe a bit more objective, so I know how important is to bring together the Kosovo/Serbia problem through these kind of collaboration and cultural exchange project, I believe these are the steps to achieve that harmony between the two sides.”

If you would like to learn more from Vjeko and his work visit his studio website at vsumic.com.