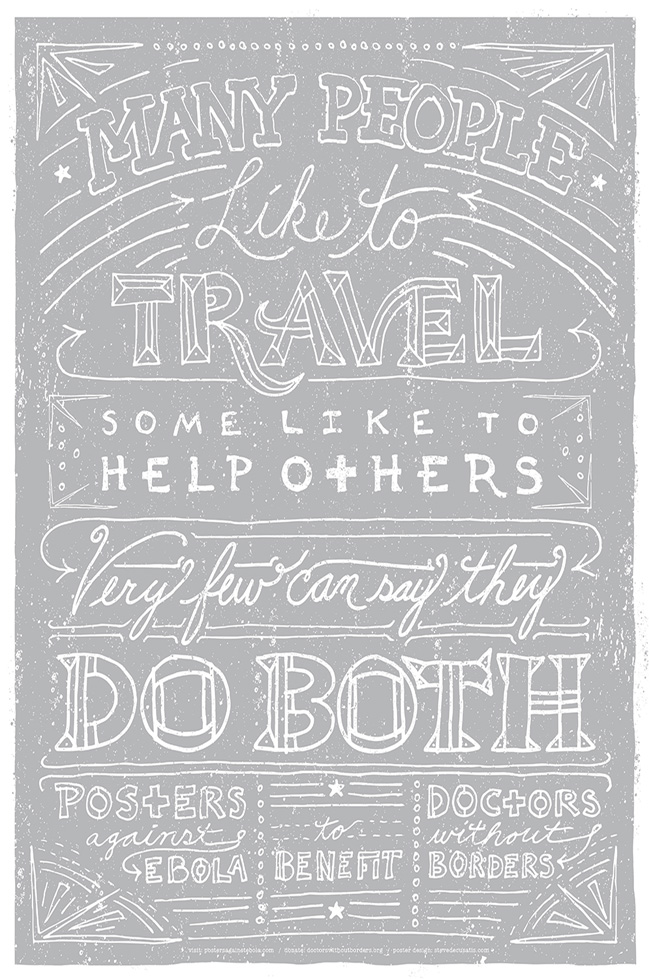 Today, for this first Poster Monday spot, we have a poster designed by Steve DeCusatis from USA entitled “Support Doctors Without Borders”. Steve was born in NE Pennsylvania, USA, in a small city named Hazleton. He grew up skateboarding, biking, walking city streets, and searching for interesting things in the woods. Now, he’s a graphic designer (specializing in logos, identities, and overall branding projects), an independent art director, image-maker, and educator. Graduated from Tyler School of Art, Temple University in 2002 with a BFA in Graphic & Interactive Design and an Art History Minor. After working in both design and agency settings, he started his own self-titled design studio in 2011 in the Chestnut Hill neighborhood of NW Philadelphia, Pennsylvania.

The creative brainstorming process for “Support Doctors Without Borders” was about 2-3 weeks on this project. It was initially a lot of sketching and image-making that ultimately many sketches gave way to some writing that Steve did (Many people like to travel. Some Like to help others. Very few can say they do both). When he was happy with the writing began drawing the type and making the letterforms the “artwork” for the poster. The final version of the poster was printed on French paper with silver metallic ink, which adds to the overall aesthetic.

“It was a lot of sketching, redrawing, photocopying, scanning and refining. I’ve always enjoyed designing posters, even back in college. I don’t actually design too many posters compared to the amount of identity and branding work that I do, but when invited to participate in a project like this, I couldn’t say no. The concept behind the poster is to highlight Doctors Without Borders caregivers and to show how few of them there are in relationship to all the people in the world. I was invited to take part in “Posters Against Ebola”, organized by Maribeth Kradel-Weitzel, which is a place for artists to express their ideas about this disease. 100% of the poster sales go directly to Doctors Without Borders.” says Steve.

To learn more about Posters Against Ebola, please visit: postersagainstebola.com, as Steve mentioned above, 100% of all proceeds from all poster purchases go directly to Doctors Without Borders. Also take a moment to visist Steve’s website, facebook and behance account to enjoy more of his work.