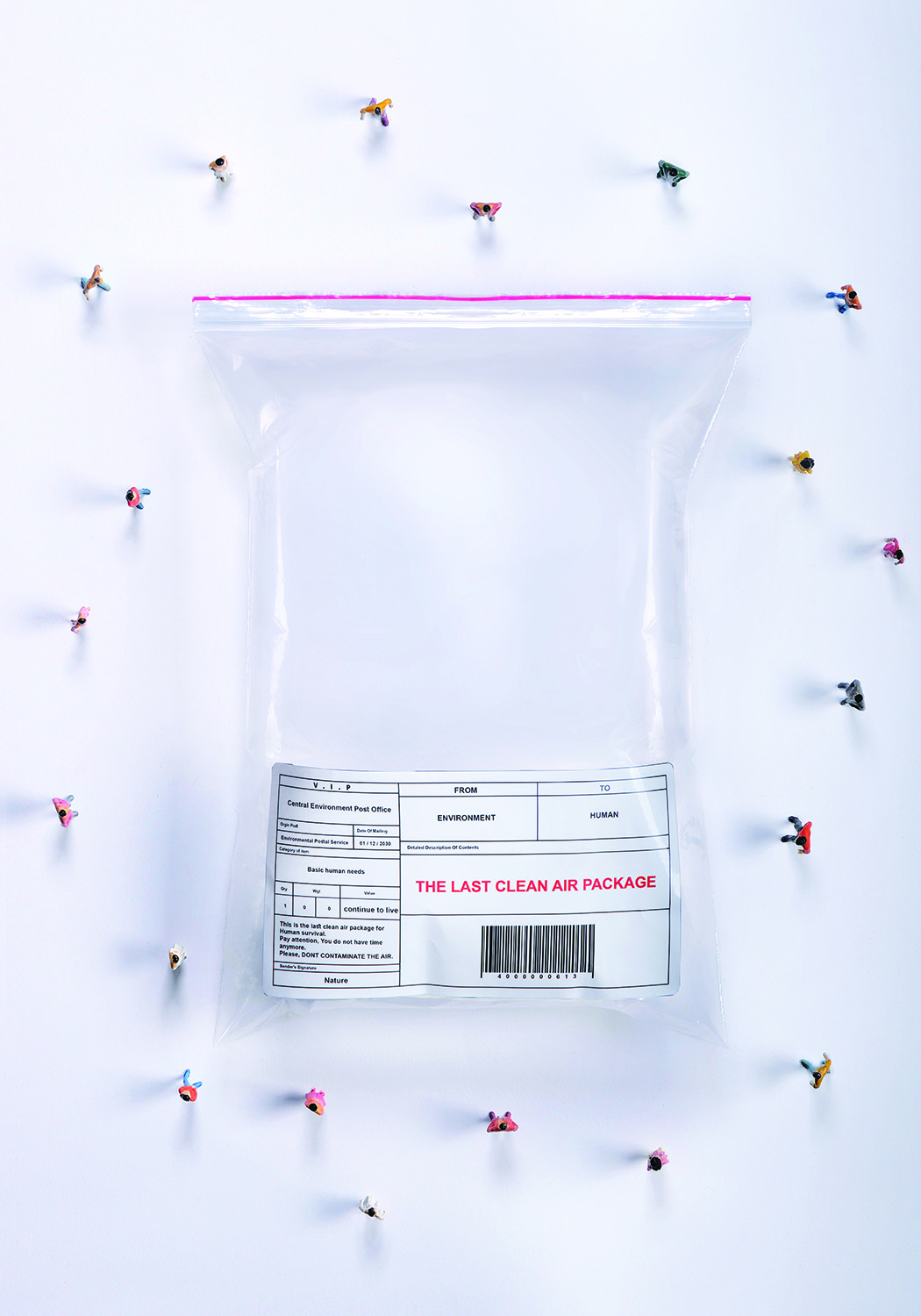 For the first Poster Monday spot of May we have a poster coming from Tehran, from our previously featured designer Amir (Babak) Bayrami and his poster “The Last Clean Air Package”.  The poster has a scenario about human air pollution. We have seen numerous environmental works regard clean air, the environment, air pollution … with the dark and black space conceptually and visually in recent decades. These images often describing the present status, preserving the environment by not contaminating, etc. But «The latest clean air package», has a bitter and sad message for humans. Avoiding above mentioned clichés, the poster depicts the future which awaits us.

There are 20 figurines around the clean air package, conceptually referring to the 20 clean cities, leading in preserving the environment, cities such as Hamburg, Chicago, Copenhagen, Helsinki, Vienna, Geneva etc. they are the last survivals of humanity in 2030. While others already victimized by their irresponsibility and negating their commitments to environment.

Originally, the idea of this poster came from a conceptual art and Installation idea in urban space in 2009. In that idea with the same name, the «latest clean air package» was packed in giant proportions in urban space and the community route, on which the postal sticker was filled with the same information that lasted one month later, the air evaporated. And the process of gradual death of society was seen by people after the end of the clean air on a gigantic scale.

In the same years, the conceptual art scenario was sent to the environmental groups and related organizations which, as usual, rejected by related authorities. Thus, for the sake of performing and visual recording, the idea was presented in the form of a poster after the necessary changes, in the hope that it’s main format (conceptual – installation art) will be implemented abroad next year.

In sum, the poster, depict our future in a frame. That its dark prophecy will be further understood by studying the layout box. Avoiding the future, without backwashing with a familiar symbol (postal system) for the consumerist population to present the present state and deliver its message in a bright but painful environment with a new, coherent and clear space. A future that, considering current status would not be so far. The latest clean air package, are the gift of nature and the environment to humanity, in the hope of preserving the remaining clean air packages still available to us.

To see more about Babak Bayrami works visit his facebook page and if you would like to submit a poster to be featured on Poster Mondays find all the info you need to participate in our submissions page.