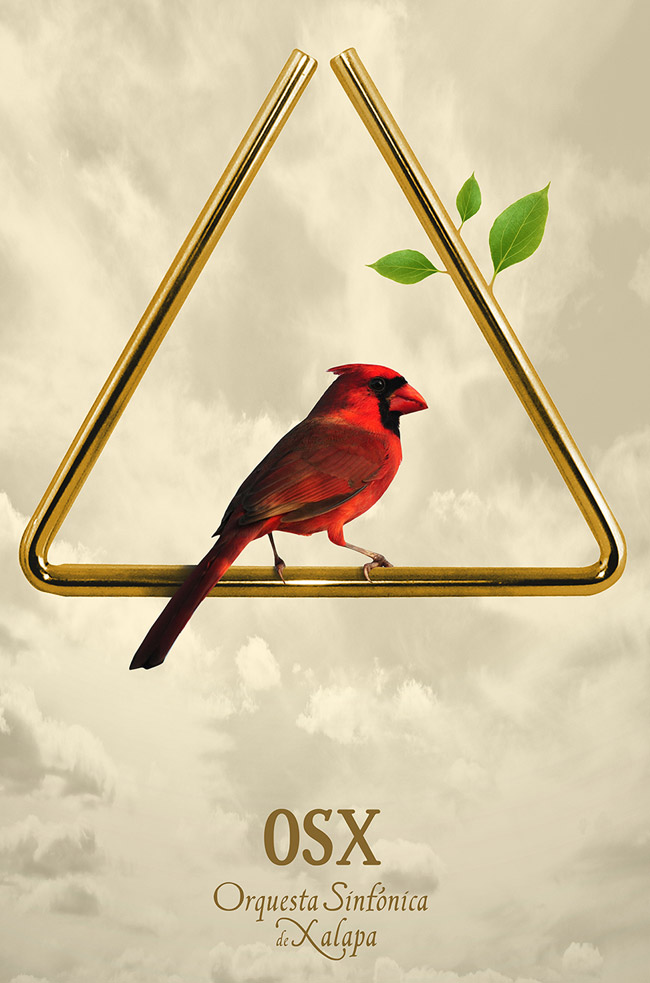 The second Poster Monday spot of the day goes to Abraham Méndez for the poster “Xalapa Symphony Orchestra”. Abraham was born in Mexico in 1985. He Graduated from the “Universidad Veracruzana” as Plastic Artist (2004-2009).

Abraham works has been selected in poster biennials such as Mexico (2010, 2012),  Warsaw (2012) and Moscu (2012, 2014) and Lahti Poster Triennial (2014), participated in exhibitions and tibutes to Francisco Toledo, Vicente Rojo, Tapani Aartoma and José Guadalupe Posada.Currentlu he is studying the last semester of a Master degree in Typography Design.

This poster is a tribute to the Xalapa Symphonic Orchestra, a Mexican orchestra located in Xalapa, the capital city of the state of Veracruz. It was founded in 1929, and is considered the oldest orchestra in Mexico. The cardinal symbolizes the music and chant. The gold triangle the classical music and the branch the spring. Initially Abraham searched for information about the subject and then he developed a semantic field to select images that symbolize and illustrate what he meant.

Abraham has been designing posters since 10 years, for him design is the combination of analysis, criticism, perception, imagination, language, culture and creativity.

If you would like to know more about him visit his personal facebook page, and remember to submit your posters to be featured in our coming editions of Poster Monday.